The coastline of East Anglia lives a double life. For a place within such easy reach of London it is remarkably unknown, but at the same time plays a vital role in our global trade network. Its landscape is bleakly beautiful and its history fascinating. It was this Secret East Coast that the Sail Britain Coastline Project set out to discover in April 2016.

Our small band of new friends gathered in Ipswich, wide eyed at the new experience of stepping aboard a sailing yacht, stowing their bags and filling all the nooks and crannies of their new home with wholesome provisions! A brief sleep, lulled by the sounds of lapping water passed before the sun rose in dazzling sparkles on the water and we slipped our mooring lines and set off down the River Orwell.

Soon the gigantic cranes of Felixtowe docks loomed like huge shadows out of the morning haze, and the throbbing of massive engines drifted towards us over the water. The peaceful fields and riverbanks gave way to the towering sides of the biggest ships in the world, a strange and awe-inspiring contrast as ‘Puffin’ slipped by like a seagull skirting a steel cliff. 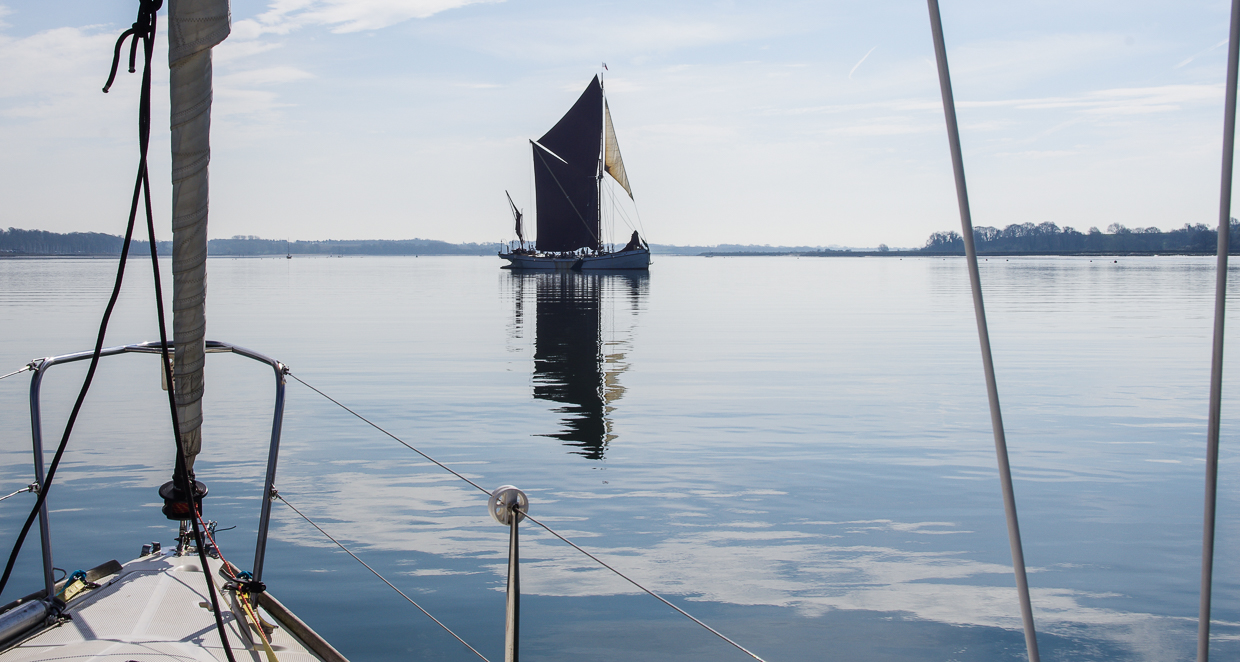 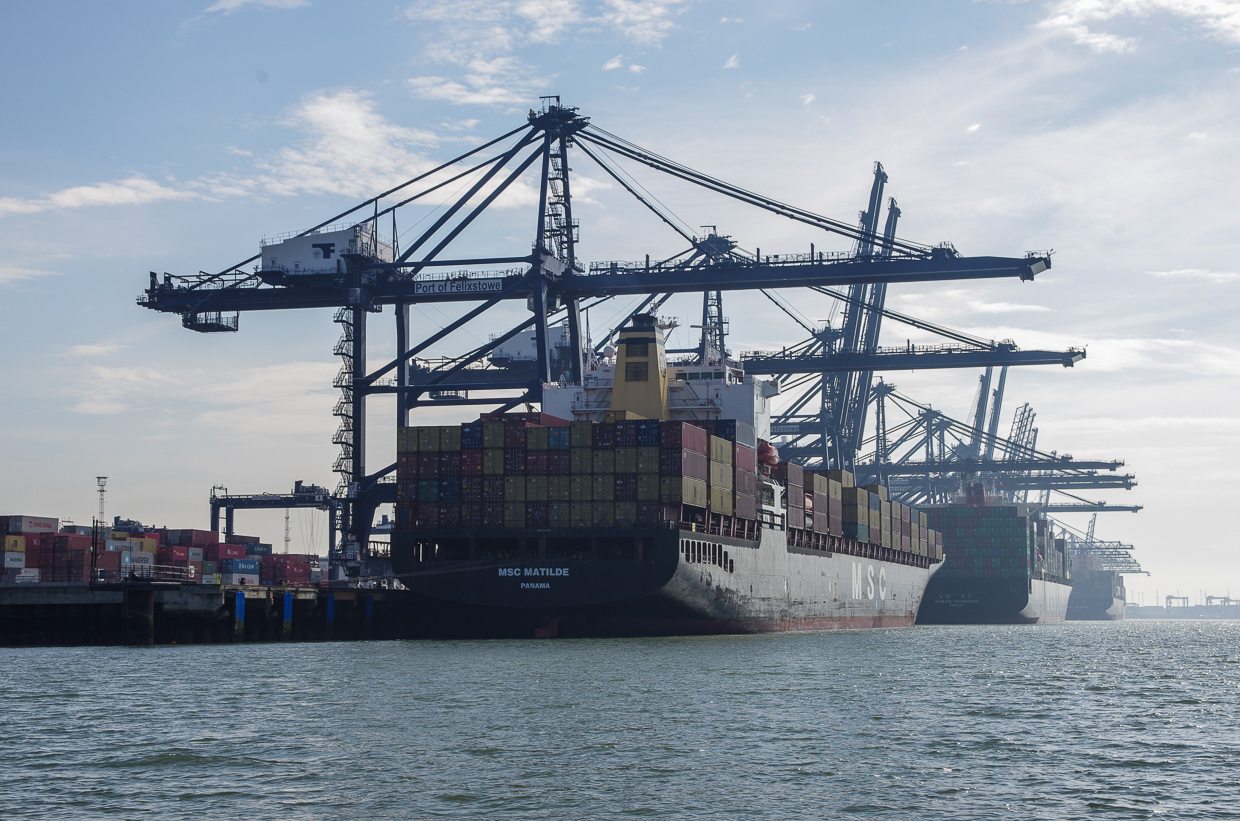 Just before noon we tied up at Ha’penny Pier to pay a visit to the Harwich Haven Authority. The HAA and Harwich Vessel Traffic Service acts like air traffic control for the giant container ships, guiding them into amongst the shifting sands in carefully dredged channels. Some of the largest ships with a draft of nearly 16m below the waterline, come in with as little as half a meter below their keels – an astonishing act of precision and skill! Our crew seemed to have come to a remote place, but were confronted by a sight of cutting edge globalisation – Felixtowe handles some 42% of the UK’s trade – amid this pristine wilderness.

With the afternoon came a welcome breeze as we hoisted Puffin’s sails and headed for the open sea. The excitement among the crew, all new to this strange experience of sailing, was palpable as the yacht heeled to the wind and leapt over the waves as the land diminished to a pale ribbon of grey on the horizon. There were smiles all round as April and yacht Puffin showed us their best! 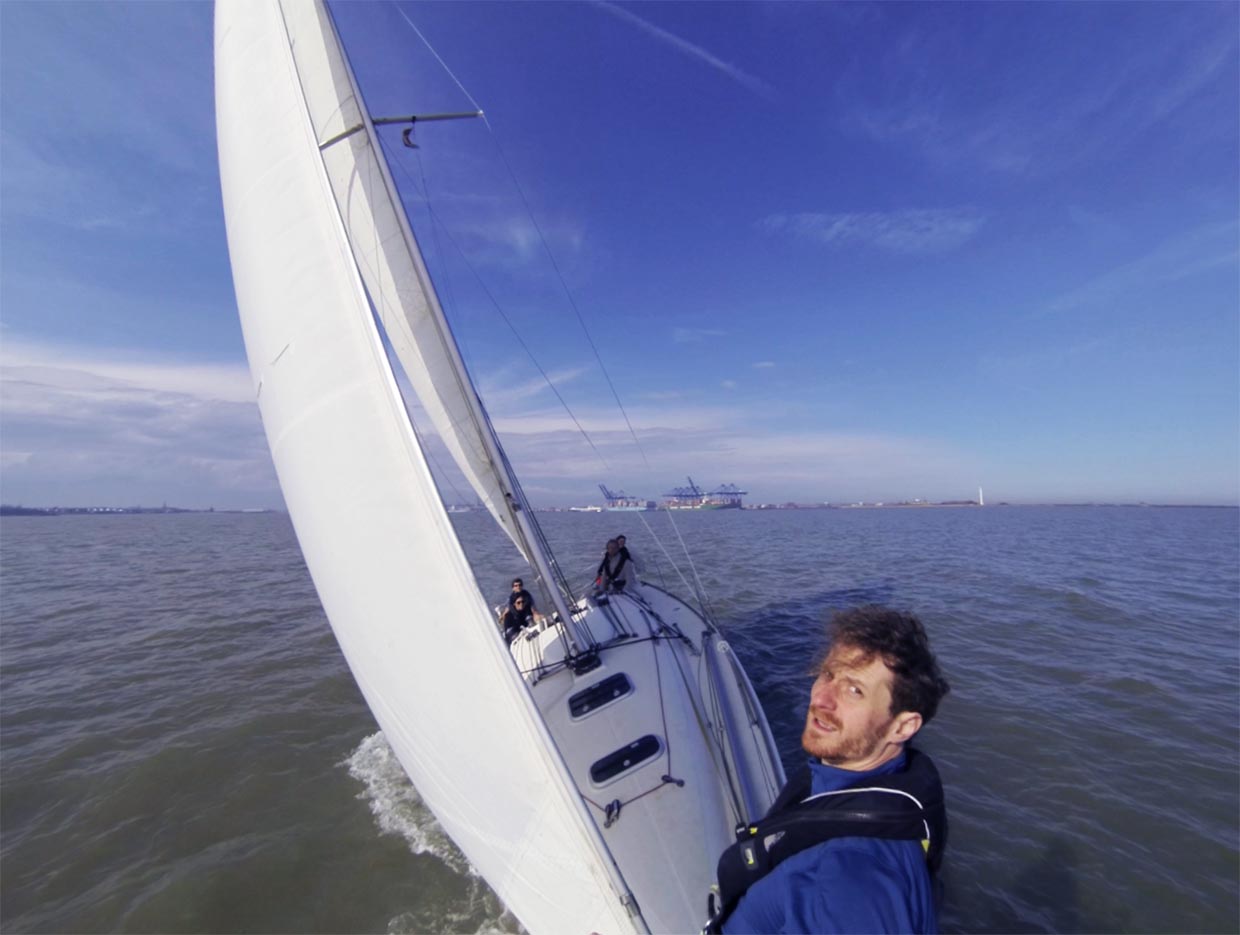 We were headed for Walton Backwaters, one of the most secluded and beautiful inlets of the East Coast, and, like most, protected by banks of shifting sands. Tidal calculations noted down carefully, we slipped over the shallows and into the tidal inlet for the night. The land all around us was a mere sliver of gold, brown and green dividing the sea and the sky, and the evening was filled with the calls of water fowl – it’s a stunning place where the world seems to stand still. The birds were soon joined by Aidan, our composer in residence with his accordion, and Karen brought us an accompanying fascinating new soundscape from below the waterline with her hydrophones. 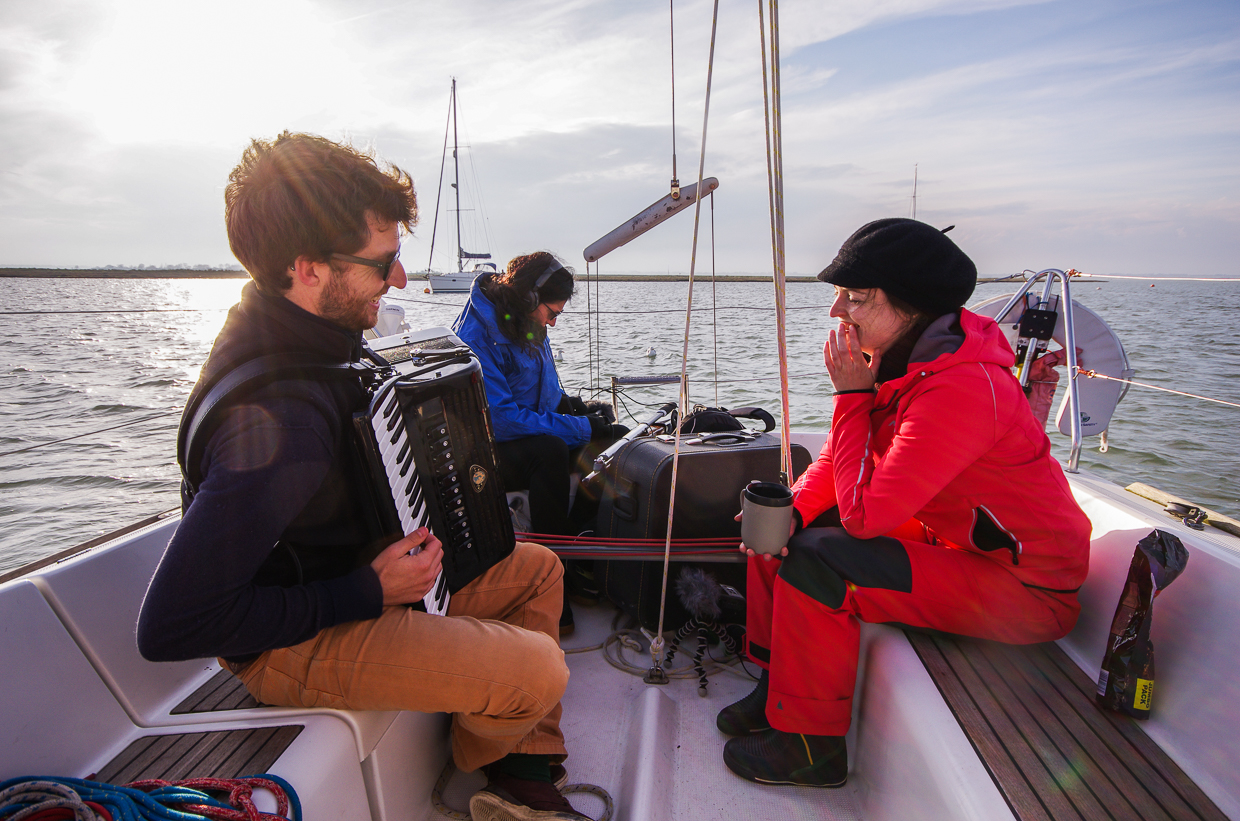 Saturday dawned grey and wet as weather rolled in from the North Sea. Undeterred we hoisted sail and Puffin pushed North along the coast towards the challenging sandbanks of Orford Haven. We were guided in by the eerily beautiful sound of the bell on the safe water mark and sailed in pouring rain the five miles upriver to Orford. The River Ore separates the mainland from the long shingle spit of Orford Ness, one the strangest and most unusual places on our coastline. The expanse of shingle is littered with twisted metal and splintered concrete from the days when Orford Ness was a secret military testing site, and there is so much unexploded ordnance you must keep to strictly defined paths. Nature has reclaimed this violent place however and, now untouched by man, the Ness is a Site of Special Scientific Interest. 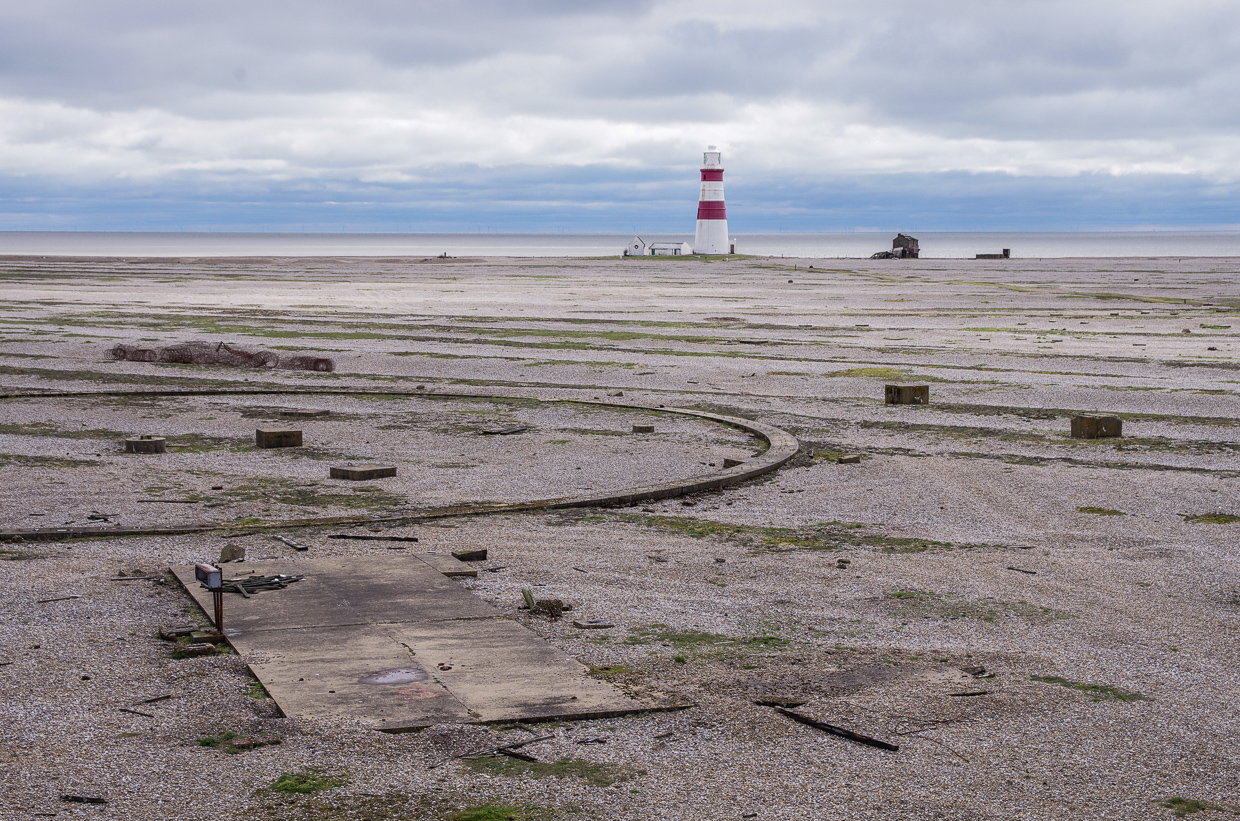 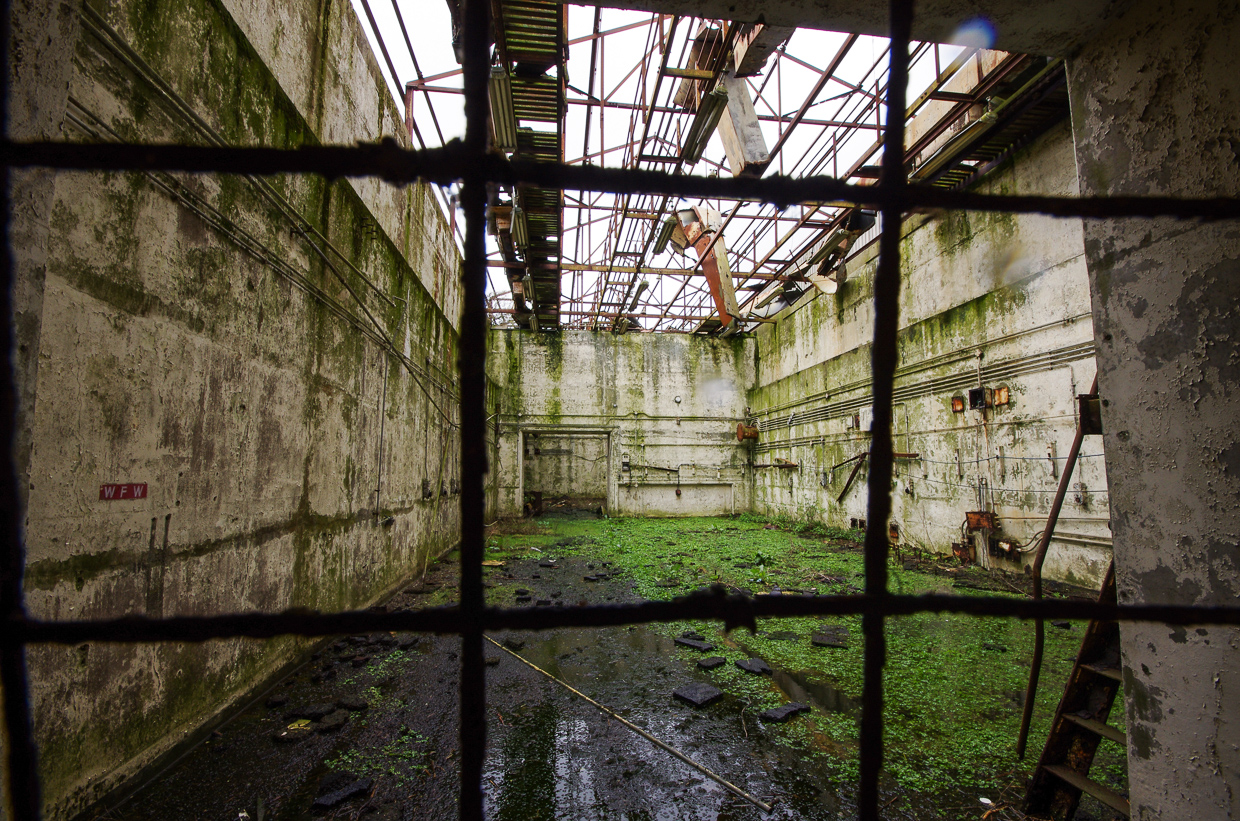 But Nature is also reclaiming the Ness itself – like much of East Anglia’s coastline, this is an eroding shore. The Orford Ness lighthouse is the last of eleven lighthouses to have stood here, all of which have, one by one been claimed by the advancing sea. Its foundations lie exposed on the beach and despite the passionate efforts of local people to preserve it for as long as possible, it’s fate is certain. 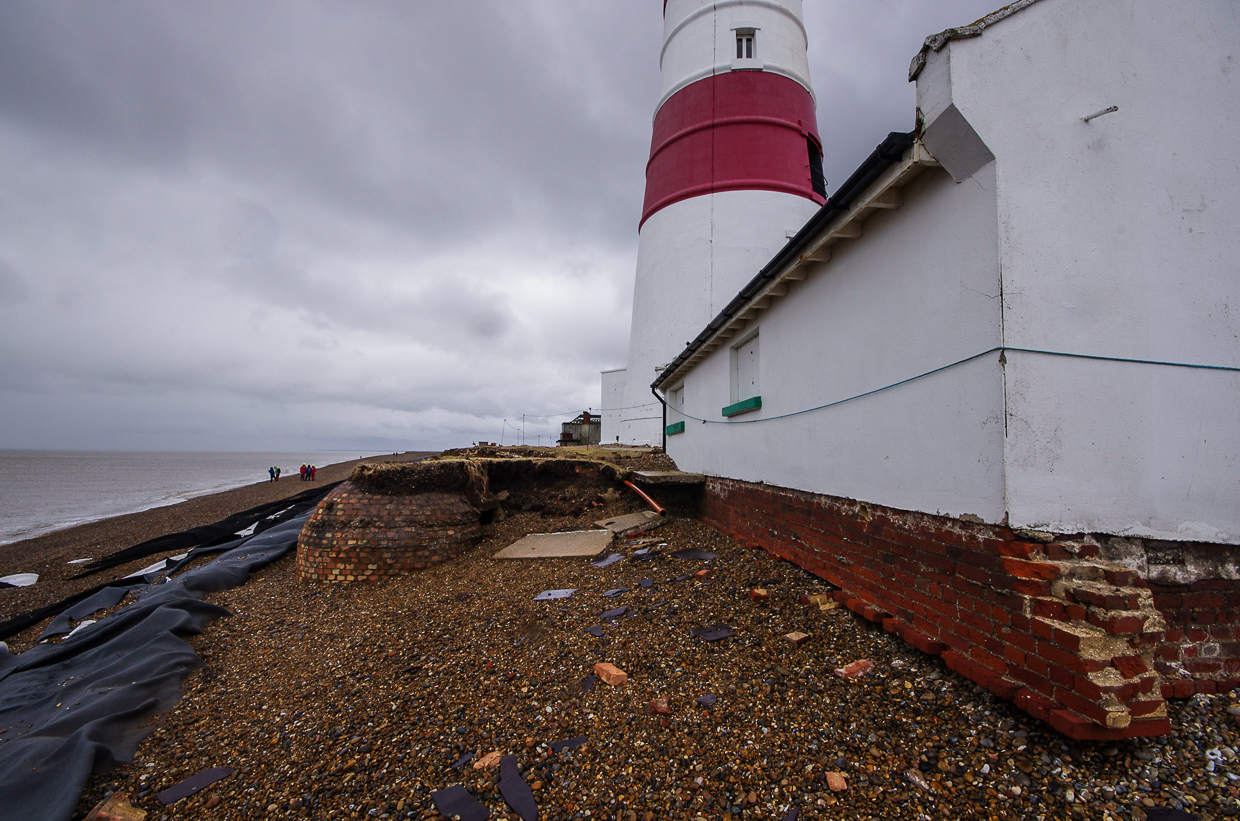 We were lucky enough to have been given the key to this stunning structure and spent a wonderful afternoon exploring, filming, and just staring out along the expanse of the coastline and the horizon. It’s a place which will soon disappear but which none of us are likely to forget. 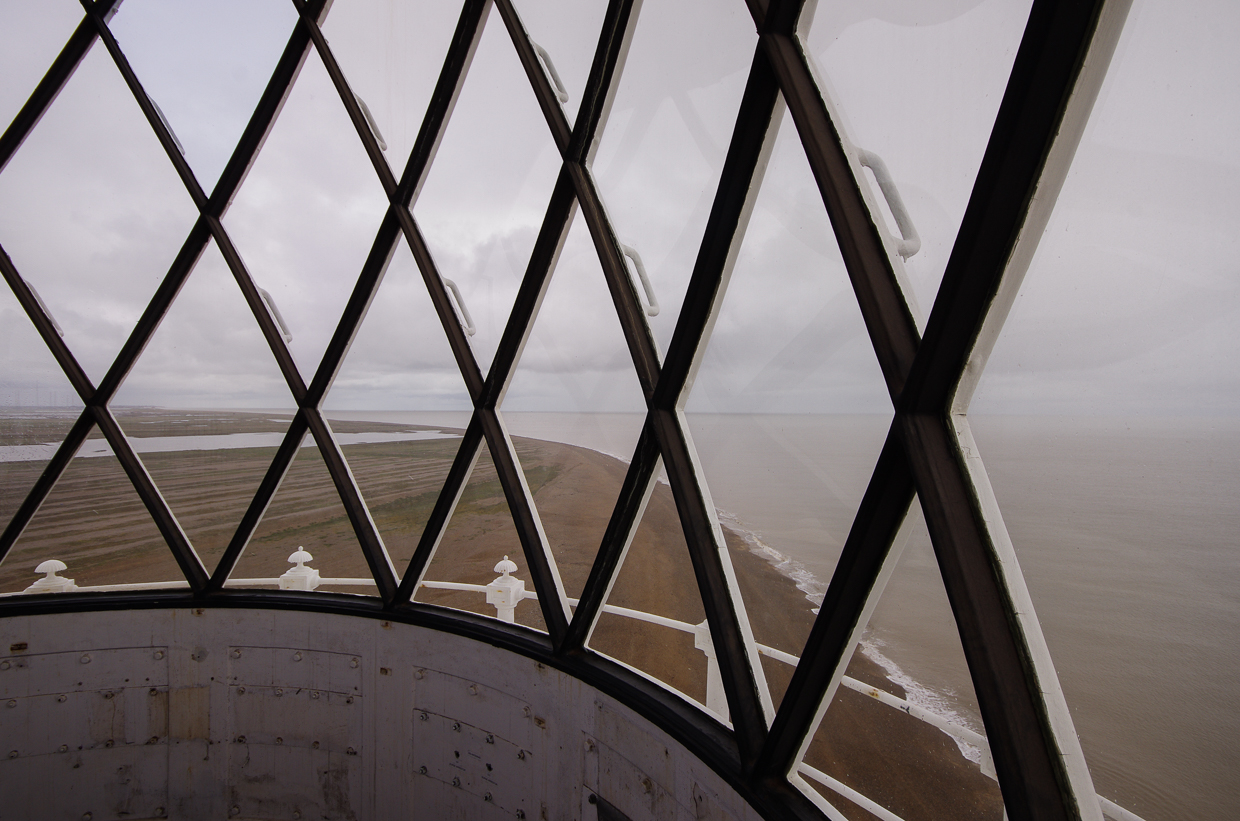 With the evening drawing on, we slipped the mooring and sailed in glorious sunshine down the Ore, through the shifting sandbanks and set our course South along the coast. As darkness fell the wind freshened and Puffin roared along at 7.5 knots, glorious sailing, homeward bound in the moonlight with a myriad lights twinkling like red and green stars in an undulating sky. 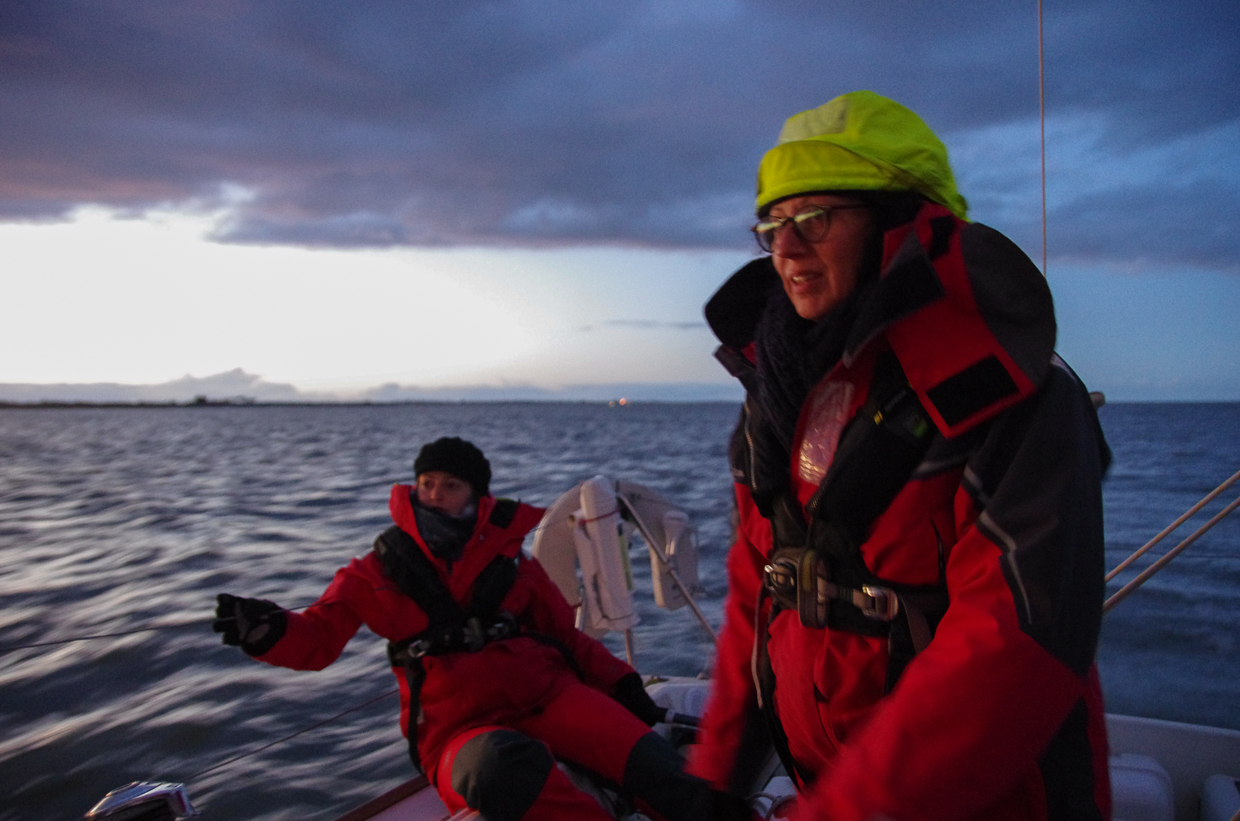 Four days of sailing and exploring had given us the chance to explore new horizons, unseen places and given us time to think about our work in a different context.

“Being my first sailing trip there has been a lot to learn. It’s been a steep learning curve which has been increasingly interesting. Slowly but surely I have got involved in all the aspects of sailing… I think particularly the night sailing was very much out of my comfort zone, and really engaged every brain cell looking at little lights on the horizon, trying to identify the route we needed to take… On the water there’s very little perspective, nothing to judge anything against; the depth that you’re looking at, is it far away or is it near? These are questions that on land you never really come across. You really get a sense of how insignificant a human being can be in a big expanse of sky, yet we have big footprints on this planet, and I think that’s important to remember, and a trip like this really gives you the opportunity to become small and insignificant, and get a bit of perspective on life.”  Karen Goonewardene, Secret East Coast, April 2016