Inspiring positive change for the ocean through sailing, research and the creative arts

In October 2015, we undertook a pilot project to test the idea of going on a voyage to a new place on a sailing boat and producing a body of work comprised of the individual responses of the participants. The inevitable variety of this work built up a patchwork narrative of the place, illustrating it from a variety of personal angles. Please see the drop down menu for individual projects from the six participants as they are published.

Tales from the Broads – Oliver Beardon

I can think of few better places to have your first experience of sailing than on the Norfolk Broads. The water is flat and the miles of reed-bounded rivers and creeks are wonderful to explore, besides the more open Broads themselves, the remnants of medieval peat workings long since flooded. And the area offers a wonderful sense of wilderness and great swathes of dark, starlit skies. It’s teeming with wildlife too – cormorants, ducks, geese, grebes, swans, bitterns if you are lucky, and it’s a short walk to the sea with its colonies of seals.

All this we were looking forward to as we met on the crowded concourse of Liverpool Street station, laden with home-cooked food and warm woolly jumpers in preparation for a weekend in the open. None of the participants had met, but the anticipation of our shared adventure and a long train journey brought us together quickly. We arrived in the Broads late in the evening and pitched our tents in a secluded spot as the Autumn chill fell, heavy with dew around us.

It was nervous faces all round the next morning as we hoisted the beautiful gaff rig of ‘Jayanne’, our Norfolk Broads Halfdecker in the gentle morning breeze. Nervousness gave way to wonder as the sails filled and we slipped silently down the winding waterway past little thatched fishing lodges, endless reeds as far as the eye could see. And then we broke out onto Hickling Broad, the fresh water foaming at the bow! A couple of showers passed over our open boat, and feeling a little damp, we tied up at The Pleasure Boat Inn for coffee. I didn’t want to dampen my companions’ first experience of sailing, however much I wanted to stay out myself! It was clear that our short morning sail had worked its magic though and we now felt like old friends. 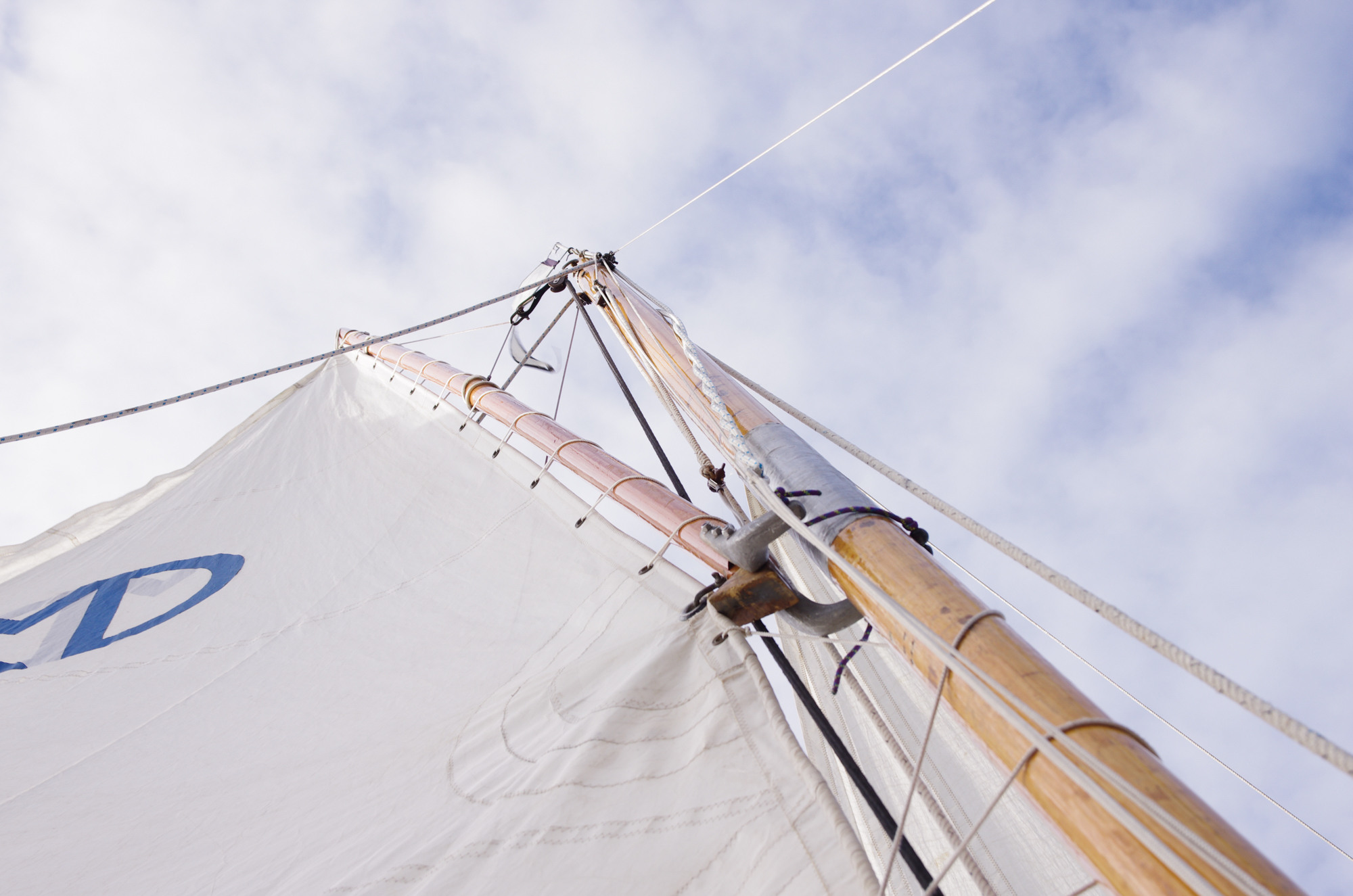 Some intense conversation followed, surreptitiously recorded by Sam on his microphone before we hoisted sail once more and the team had their first proper lesson in sailing! We were beating back up the narrow channel which stretches down the centre of Hickling Broad. Stray too far outside the posts and you risk running aground! Miranda took the helm, Fiona the jib sheets and with Josie on the mainsail Jayanne was soon bent to her task, water rushing past the gunwales. ‘Ready About! Helm-a-lee! Lee ho!!’ went the cry as she swung through the wind, sails a-flutter before heeling to the breeze on the new tack, wooden spars creaking under the strain and smiles blazing on the crew’s faces. 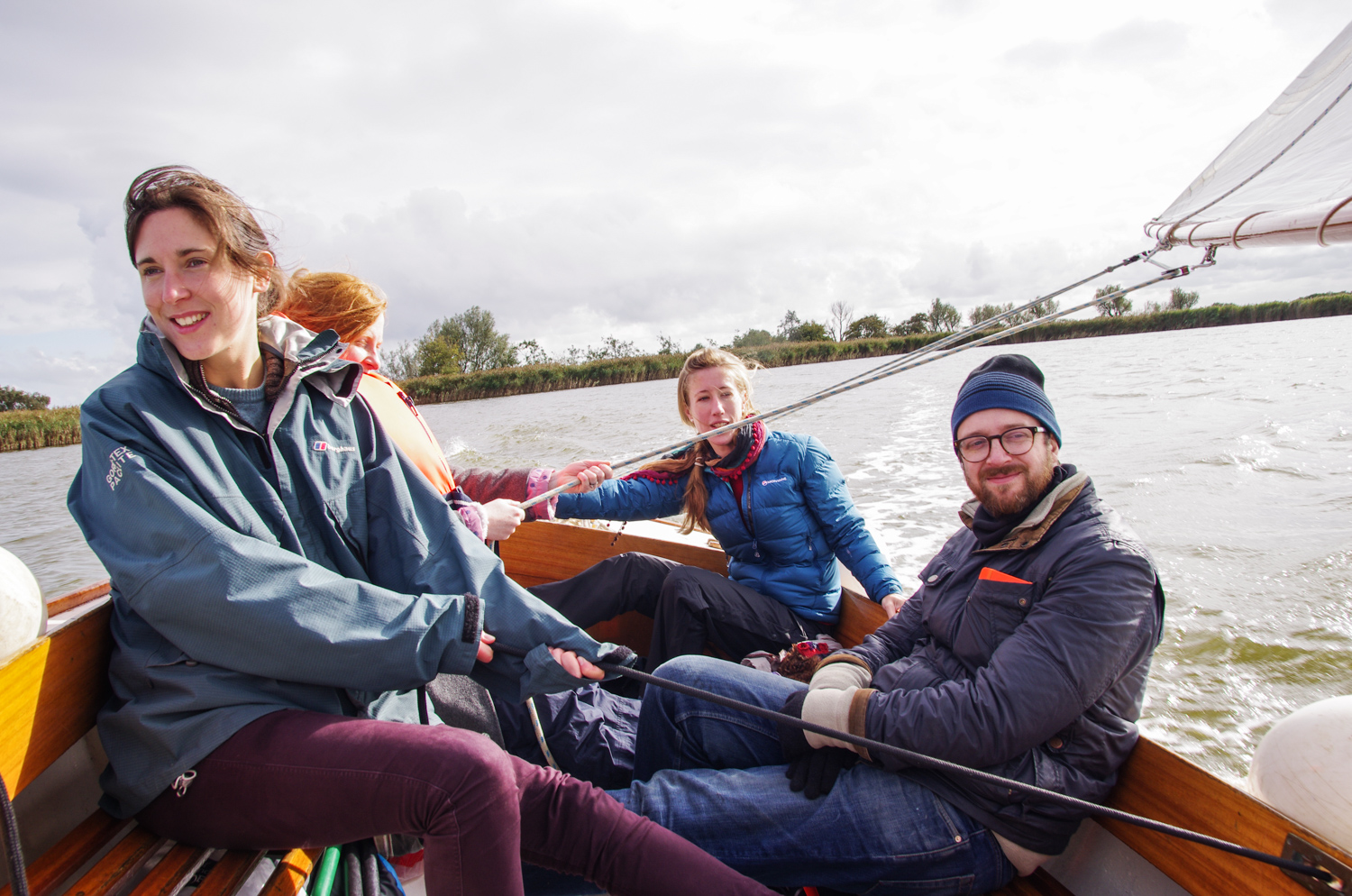 There were some expressions of nervousness about sailing before we had set off but I was now convinced that these were swept away and replaced with the exhilaration of the power of the wind in one hand and the power of the water in the other, we insignificant earthlings and our boat caught in that groove of pure excitement!

Sailing is hard work though, and especially at first can be exhausting, but it leaves you with a wonderful balance of mental and physical exhaustion in equal measure. With this lovely balance and feeling of having achieved something, we moored ‘Jayanne’ not far from Horsey windpump and settled down for a lunch of feta and spinach quiche, green lentil salad, nice bread and a camembert. Tummies filled, we headed off across the fields, paints, cameras and microphones in hand, to the great wall of dunes which keeps the sea at bay.

This stretch of the Norfolk coast is stunningly beautiful. From the top of the dunes you can see the half arc of the sea’s horizon  to the East, and the wild expanse of reeds and fields at about the same elevation to the West, separated only by the sea defences and the wind whistling in the marram grass. 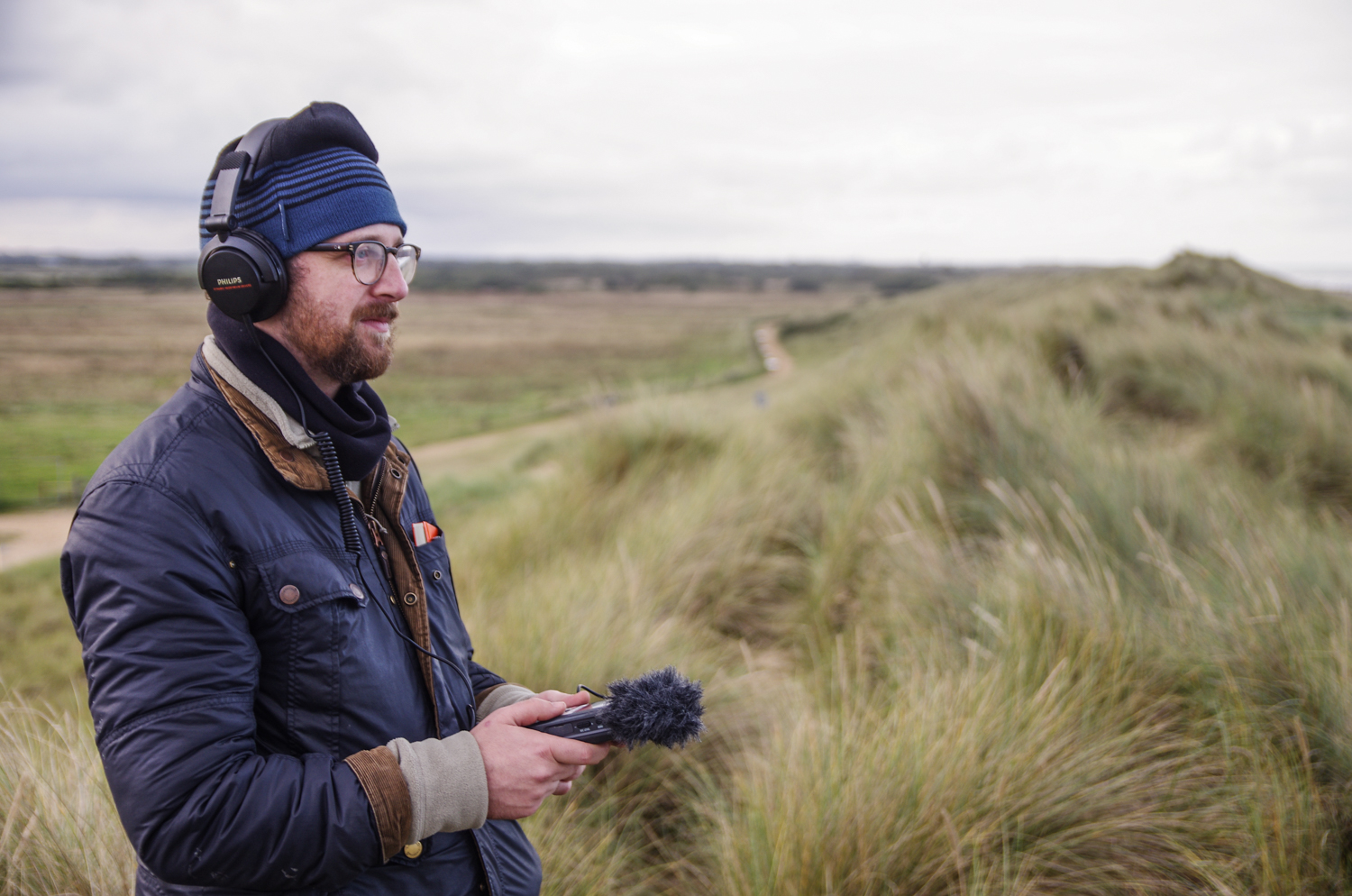 Sam gathering sounds for his composition

As dusk began to fall we set our sails once again and headed out into the gloaming, the sounds of the boat and the rushing water more intense in the gathering darkness. High on a bank above the reeds with ‘Jayanne’ at anchor below we slept beneath the Milky Way.

Nighttime in the wild is one of my favourite times. At some point in the small hours as I lay awake listening to the wind rushing in the reeds, I heard the distant cries of geese. They grew gradually louder and louder until I could distinguish individual groups as they flew in unseen V’s overhead. The excitement was palpable! We’ve arrived! The long journey is over! How did these birds, the first arrivals from higher latitudes, know where they were in the darkness after the long journey South to their wintering grounds in the Broads? Their cries settled into a distant contented gabbling and I drifted slowly back into the land of nod.

As the sun came up over the reeds we wolfed our hard-boiled eggs and freed ‘Jayanne’ from her moorings, her sails hoisted and bending to the morning breeze as we short tacked up the narrow channel. It was a glorious day, the Autumn sun still warm into the afternoon as we sat by the water, sketching, talking, breathing in inspiration from this new place. Our responses are all different and unique but together create a rich portrait of the Broads from a literary, visual and sensory perspective. 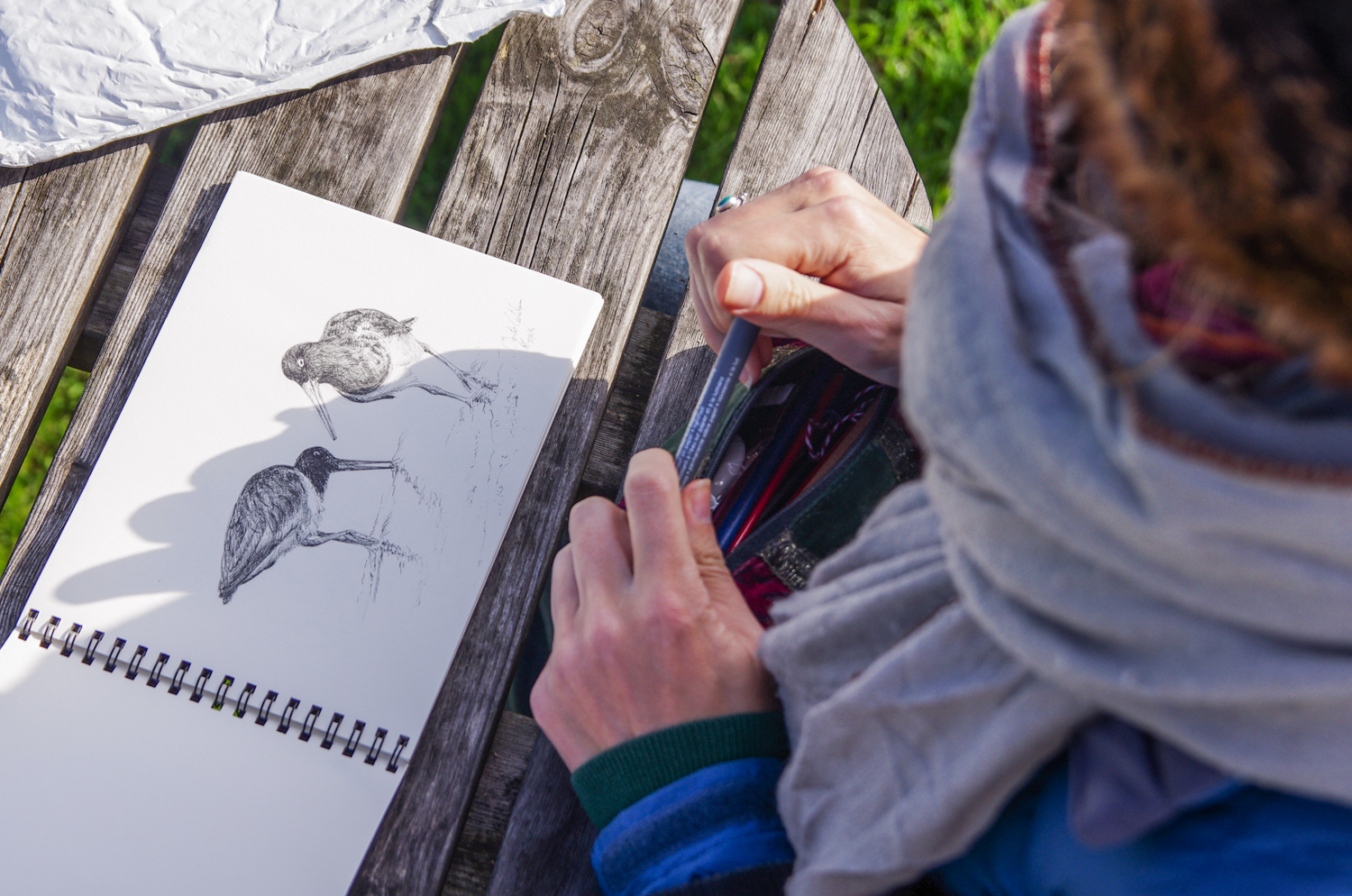 My thanks to my fellow sailors, Fiona MacDonald, teacher of architecture to children for the RIBA, a director at Design Education and watercolourist, Josephine Thompson, painter, Sam Levine, architect and sound recordist, Miranda Jones, sustainable fisheries and climate change researcher, and Jeremy Hunt, writer, curator and editor of AAJPress.